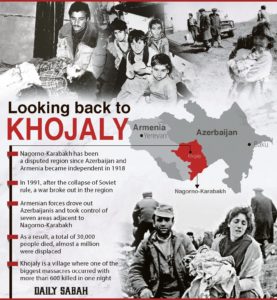 Khojaly was Azerbaijan settlement situated within the administrative borders of the Nagorno Karabakh region of the country, on the road Agdam — Shusha, Khankendi (Stepanakert) — Askeran near the only airport of the region. Its population constituted over 7 thousand people. Because of its communication advantage of harboring the civil airport just before the start of Nagorno-Karabakh conflict it had become shelter for refugee Meskhetian Turks fled the bloody inter-ethnic clashes in central Asia as well as Azerbaijani refugees deported from Armenia.

Late into the night of February 25, 1992 the city has become under the intensive fire from the town of Khankendi and Askeran already occupied by Armenian forces. At night from February 25 to 26 the Armenian armed forces supported by the ex-Soviet 366th regiment completed the surrounding of the town already isolated due to ethnic cleansing of Azerbaijani population of its neighboring regions. The joint forces have occupied the town which has been brought in rubbishes by heavy artillery shelling. After all 150 people defending the town were killed by overwhelmed fire and by superior forces of advancing army regiments the remaining handful of the town’s defendants provided a humanitarian corridor for several hundreds of the town’s residents to escape their homes.

Under the heavy conditions the towns’ population moved into the darkness of night to be met at the middle of the route by ambush of Armenian forces and militia. Several thousands of fleeing civilians were ambushed at several points and being shelled by bullet rain tried to find refuge in the near-by forests and mountains terrain. However advances punitive teams of so called NK defense army after eliminating handful of policemen accompanying the refugees column reached out unprotected civilians to slaughter some, finish off others, having some bodies mutilated and scalped as the notorious karabakh war trophies.

In a few hours of night from 25 to 26 February 613 civilians were killed including 106 women, 83 children. 56 people were killed with outrageous brutality, 8 families were totally exterminated, 25 children lost both parents while 130 children lost at least one parent in a massacre which has become the most brutal punishment of civilians during the whole 3 years of the conflict’s military phase.